The Lunar Festival is a 2-week event based on Chinese New Year and will run between the 1st and 15th February (or the 2nd – 16th for Oceanic players). There aren’t really any changes this year except for the heirloom upgrades added in Patch 6.1.

These fireworks were first seen during the short pre-MoP Theramore’s Fall scenario and cost 25x Coins of Ancestry. Thankfully, learning one automatically teaches you the toy for the opposing faction.

These faction-specific pets cost 50x Coins of Ancestry each. The good news is, they are BoE meaning you’ll be able to trade them or purchase them from the AH. 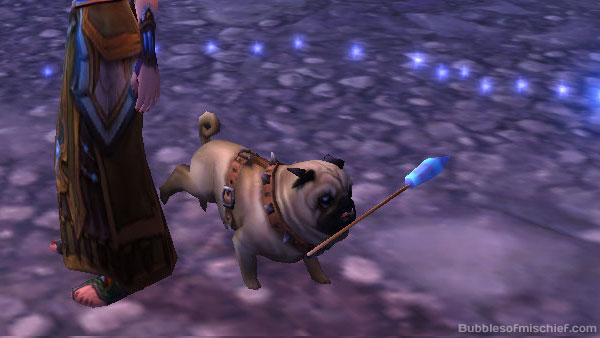 Give your Perky Pug some fireworks to play with for the cost of 1x Coins of Ancestry. Watch him run around in circles having the time of his life.

The following mounts can be purchased from the Blizzard Shop or through a 6-month subscription.

Legends say that in his hour of deepest doubt, Emperor Shaohao, last ruler of the Pandaren Empire, was visited by Hogrus, Swine of Good Fortune, as he meditated upon his people’s future. Today, pandaren across Azeroth consider Hogrus to be a sign of prosperity and great things to come. You would be wise to seek his blessing as you pursue your own fortune, wherever the four winds may take you.

As the Golden Lotus worked tirelessly to repair the Vale of Eternal blossoms, a single statue came to life and wordlessly defended them from the Sha that assaulted them. Believed by some to be a sign of good fortune and others to be a gift from the Light, Shu-Zen provides faithful companionship to any that would defend Azeroth from the maddening whispers of the Old Gods.

It’s not quite certain where Squeakers found his incredible wings of jade. Perhaps he outwitted the Jade Serpent herself. Now Azeroth’s first flying rat is ready to set out and spread mischief wherever he goes!

In 2021, Lucky Yun is available to players who purchase a 6-month subscription. This includes recurring subs with a future renewal date as long as it happens before February 12, 2021.

Trying to turn fortune in your favour? You’re in luck! The pandaren elders claim that Lucky Yun will bestow prosperity upon anyone who touches its glittering hide. Take this ox by the horns and be prepared to meet your good fortune in Azeroth and beyond.

Get this charmed mount at no additional charge with the purchase of a 6-month subscription. Lucky Yun is also available as a separate purchase and can be gifted to your friends.

Three firework schematics cost 5x Coins of Ancestry each and engineering skill of 500 to learn.

The following items will upgrade an heirloom piece to 90 and 100, respectively.

If you managed to get the achievements done in previous years, there’s really not a lot to do. Last year, there was only one new achievement which required you to honour the 9 new Elders introduced in Cataclysm (bringing the total number of Elders to 84).

Mount Hyal
Elder Windsong in Hyjal – (27, 62) Located at Sanctuary of Malorne
Elder Evershade in Nordrassil – (63, 23) Next to the Inn, Alliance side portal

Deepholm
Elder Stonebrand in the Temple of Earth – (50, 55) Located at the Entrance of the Temple
Elder Deepforge in Deepholm – (28, 69) Located at Stonehearth

With so many Elders to visit, it will be easy getting enough coins to buy the pet. However, I found it faster to accumulate the coins from Northrend as they are more tightly packed, as well as the new Cata ones for the achievement. All-in-all, you’ll be getting a lot of flying miles. What a shame there’s no frequent flyer program :P

2016 is the year of the Fire Monkey who is said to be ambitious and adventurous, but irritable.

Disc priest and relic hunter who loves uncovering new treasures, completing those jumping puzzles and all things pets. You may know me as Cymre Brightblade. Catch all the treasure, pet battle strategies and warcraft secret guides on YouTube.

Day of the Dead

How to beat Cymre Brightblade